That photo, that interview, that video, those proves, those incident, all wrapped up together beautifully to a such perfect and most anticipated moment. Yes, Hanchul has been kept in touch, they are always remaining as BFF after all these years, they HAVE MET on the 31st Dec 2013, Hangeng travel to Korea and celebrate new year with Heechul. I deliberately do not make this entry before everything has been cleared up, however, as now Hangeng is the one who answered up those questions himself, I'm pretty much sure and guarantee the information in this post.

So, these chain of events below will sum up the entire truth of these lovebirds.

This photo is real and used by Heechul himself as his personal profile picture on KakaoStory as can be seen in the screen capture below. (I need to censored Hee's account as I don't want to interrupt his privacy :D) 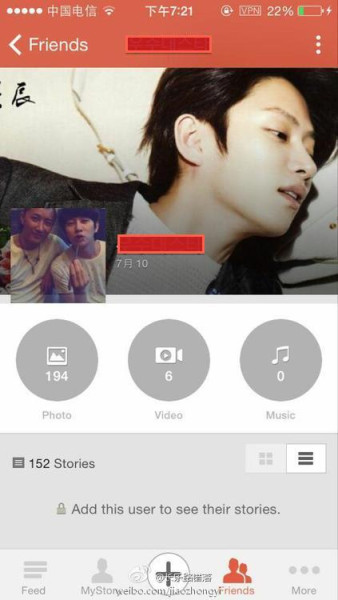 Hangeng is confirmed to be in Korea during last year's new year as a papparazi catch a photo of him at the airport. I can't find out the exact airport, but I'm pretty sure that it's taken on his way to Korea as stated by one of his ssasaeng fans and Heechul's instagram video who catch a very familiar voice on the background during his new year's greeting. Heechul's Video
And you could hear the familiar and gentle "Heechul-ah~" voice in the background around 0:10-0:11 TT__TT *Can I just cry and feel so damn nostalgic with that voice*

With the photo spreading out crazily on the net and pratically just become too sporadic, Chinese Newspaper, Reporters, and even Allkpop don't want to miss these chance of 'big news'. When asked about his picture with Heechul, Hangeng replied that it is natural for friends to meet up .
Reporter: Recently, your picture with Heechul has been going viral on the internet.
When/why did the both of you take that picture?
Hangeng: Because I was filming in korea, we just met up naturally, it has been long since we last met.
Credit: 西部网娱乐
Chinese to English Translation by cmkish0w (worldwideELFs)


I just want to scream happily and jump upside down upon hearing this exciting news. I know that we were not delusional, we were not hanging on false hope, and we were not crazy. Hanchul is alive, they have been in contact, and Heechul's smile is definitely back :') Just look on that photo, the happiness is just reflected in his eyes. I believed that Heechul has been missing Hangeng a lot, but the beauty of long distance relationship is just so touching T^T.

Personally, I don't care about the shipping wars over Hangeng and Gunhee, Heechul can choose who he want to be with, he is a free man, but one thing that couldn't be denied, Hangeng will always be one of Heechul's most important person. Period. Just don't compare Hangeng and Gunhee then terrorise Heechul with these stupid questions of, 'Which one is better?', 'Do you see Gunhee as Hangeng's replacement?'. Stop this, you cannot definitely weigh one person with another, even a child will be angry if he/she was compared with his/her siblings, so why did you?

I'm just popping out to share the excitement of Hanchul reunion~ pinkdaisuki out.

PS: for the 101 things about love fic, it is still in progress and I have no plan to drop it, however, I just need a lot of time to write it due to the endless task, continuous writer-block, and stacked up laziness :P Please be extra patience with me.
Collapse